Britains Got Talent! Yep, real talent. Creative industries in the UK add over £8 million per hour to the UK economy. The Beatles, The Rolling Stones, The Who, The Sex Pistols, The Clash,  David Bowie, Mark Bolan, Hank B. Marvin &amp; The Shadows, Pink Floyd, The Specials, Madness, Amy Winehouse… I could go on. 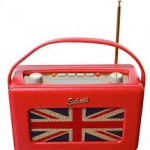 These are all iconic figures in the British music scene, who have played their part in making the UK perhaps the most exciting place on the planet for music. In London, you can watch gigs every single night for a year and see quality artists of every musical genre under the sun.  Many US artists got their first big break in London, perhaps most noticably Jimi Hendrix, who broke in London first. We are a discerning market and we value creativity. This is not just music, but art, design and invention. I’ve long been of the opinion that this is in spite of government policy, rather than because of it. Take music, in the 1960’s, pirate stations pioneered in the field of radio. They started playing the type of artists that previously the BBC shunned and opened the door to the floodgates of talent that fired the swinging 60’s. Did the then Labour government of Harold Wilson recognise that we’d accidentally invented the best radio stations in the world? Nope, his government passed the Marine Offences act banned them all. 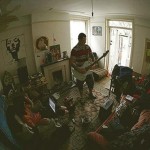 There have been many similar acts, some deliberate, some trying to fix a completely different problem. Perhaps the latest has been the act banning squatting in non commercial property. You may wonder what this has to do with creativity? Well as everyone knows, rents are sky high in London. Whilst the London music scene is the beating heart of our creative society, it is impossible for anyone who is an up and coming artist to make a living from music in London if tehy have to pay rent. For decades, musicians have moved to London, and livied in squats until their career has become established. The popular myth about squatters is that old ladies nipped down the road to get a packet of scones and returned home to find that squatters had set up shop in their homes, forcing them away. These squats then became 24 hour drug fuelled party centres. In truth, most people squatting were doing so purely as it was a way to survive. Many of our best musicians, people who have generated billions for the UK taxman, have at some point in their career had to squat out of necessity.

Generally living in squats is not a luxury lifestyle, it was just a means to an end. It was a way for creative individuals to get by until their talents are recognised. The changes to the squatting laws criminalised all of these people. Whatever the good intentions of the law, it was a full frontal assault on the Londons most creative people. I’ve never lived in a squat, but I’ve played music with plenty of people who have. Often they were talented musicians who had moved from Liverpool, Manchester and Scotland with a dream. People who don’t understand creative people would say “Well they should get a job whilst they build a career”. This is what people who don’t understand a musicians lifstyle say. To become a truly awesome player, you need to practice for hours every day. You need to be able to take opportunities at the drop of a hat. You need to play gigs, often getting home in the early hours. You need to spend weeks in the studio. Often you need to take gigs that pay nothing or peanuts. This is how you “pay your dues”.

The current laws make it virtually impossible for anyone, except those with rich parents, to survive under such conditions. If the only people who can survive are those who come from comfy backgrounds and don’t need to semi starve to recognise their dreams, then our position as a centre of creativity will wither away. Anyone who simply says “Too bad, they should get a job” is someone who doesn’t understand creativity, doesn’t recognise the contribution it makes to the economy and someone who wants to relegate Great Britian to the sorry list of also ran nations, where people simply do what they are told and don’t think about anything, except in a way they are told to.

It is not only the lifestyle of creative people, starting on their journey of creation who are under attack. It is also the infrastructure that supports them. My friends at Bally Studios drew my attention to the horrible fact that not only are the Iconic venues of The Purple Turtle in Camden and The Rythm Factory in Whitechapel are under threat of closure, but Air Studios, founded by legendary Producer George Martin is also threatened. Lets face it, if even George Martins studio cannot be protected, then there is no future for the London music industry. I am probably alone in having expanded my London studios in the last five years. The experience I have had to endure to do this is one that would probably have driven anyone else insane. It took us 18 months to secure a bank loan to build the new studio. Our existing bankers at RBS, told us that they would happily lend us money if we were putting up premises for a “blue chip” like TESCO’s. Sadly as we were investing in ourselves, we had no chance. So we had to go back to the drawing board. We changed and scaled down our plans, to such an extent that we could self finance the fit out. We then found other bankers, who were prepared to assist with the actual costs of construction, with a mixed usage building, rather than our original more exciting plans. The Council proceeded to put some ridiculous conditions on the planning application, the sillyist being that we had to lower the roof by 9 inches, so that we didn’t spoil the view of the M1 from Mill Hill Park. In all the process took four years from engaging the original architect (he retired in the process!) to us opening the doors of the new studioin May 2012. 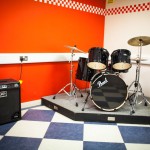 What we have now is a seventeen studio facility, of which ten are clapped out, converted lock ups and seven are purpose built, air conditioned rooms, with great facilities. In the three years since, we’ve built up a fantastic reputation and we have people coming from all over the world to rehearse and record at the studios. Whilst I am immensely proud of what we have achieved, if I was a sane and rational individual, I wouldn’t have bothered.

As it is, I am driven by the desire to ensure that the London music scene is the centre of world music.

Dozens of people have said “Why don’t you knock all this down and build flats, you’d make millions” when they visit the studio. The answer is simple. I fervently believe that such an idea is short termist, bad business, unpatriotic and bad for our children. Let me explain why.

I care passionately about the London Music Scene. I run a studio, I’m part of a committee that organises a very successful music festival, I play guitar in a band, I met my wife when I was playing a gig at The Three Hammers Pub in Mill Hill, my nephews have a great band, that I dearly hope I’ve had some influence in helping them form. My studios has 3,200 people on our mailing list. Every one of them has booked a session at our studio since March 2013, and each one of them has probably brought down 4-5 people with them on average. We estimate that we have over 1,000 people a week pass through the studios (365,000 per year), plus another 500 who visit the shop to buy strings and spares. We have sold 900 tickets for this years Mill Hill Music Festival and with free gigs, we expect over 1,500 people to attend the entire festival. What does all this mean? To me it means that music is a vital part of my life, the life of our local community and a huge part of our local economy. When we surveyed our customers, over 60% regularly spend money in local businesses (pubs/shops/cafe’s) before or after rehearsals. I mention this merely to demonstrate that the music scene isn’t a vacuum, it is part of the life and culture of our city and our country and it is invaluable. We must fight as hard as we can to protect that culture.

What can you do?

In the last few years four of my biggest competetor studios in North West London have closed to be redeveloped. Unlike most businessmen, I think that the demise of such establishments is a tragedy. Music is like a forest or jungle, if one is on its own it will wither and die, you need a whole forest of trees to support an ecosystem. The same is true of venues and studios. Please support the #SaveLondonMusic Campaign.