I will be on the Robert Elms show on BBC Radio London between 1.30 and 2pm on Tuesday 24th November. The subject is  London’s lost music venues and those that are still open and the campaign we are running to preserve our musical heritage – The Save London Music Campaign.

Why do we need such a campaign? The music industry needs small venues and studios to survive. You have to hone your trade in the small pubs and clubs, before you can step up to Wembley and the O2. And you can’t even step out at your local chip shop to perform unless you’ve had a few rehearsals! Music is an important part of London culture and the UK music industry contributed £4.1 billion to the economy.

Since we started the Save London Music Campaign in February, over 20 venues and music studios have signed up as supporters of the campaign. We’ve had support from politicians such as Green GLA member Darren Johnson, who was instrumental in setting up the Mayor’s small venue task force, and the leader of Barnet Council, Richard Cornelius amongst others. We’ve also received support from a whole range of highly regarded and influential musicians, including Lee Thompson (Madness, Ska Orchestra), Wendell Richardson (Osibisa), Boz and Lyn Boorer (Morrissey, Polecats) ; Emily Ovenden (Medieval Babes), all of whom have given their time to support the campaign. 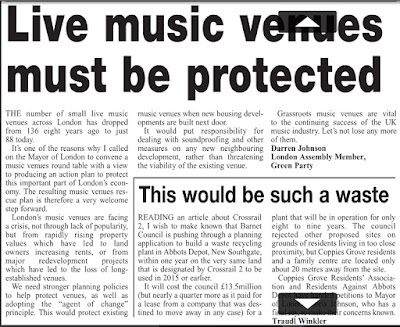 Darren Johnson had a letter published in the local press detailing the threat to local venues. In this he detailed that the number of  live music venues in London has shrunk from 136 to 88 in eight years.

The Save London Music Campaign is setting out to identify these 88 venues as well as any Darren may have missed and hold gigs at all of them before the end of 2016, under the banner of the Save London Campaign.

To support the camapign and to help us raise awareness, we had the launch party for our campaign website at The Fiddlers Elbow in Camden on the 6th November.  On the Robert Elms show, we will be detailing our ambition to find all of London’s live music venues and to stage gigs at every one, recording the details for posterity on the Save London Music website.

We are delighted to be kicking off with some amazing gigs.  Lee Thompson is playing a special gig at The Chandos Arms in Colindale (North West London) on 12th December for the campaign and Boz and his wife Lyn have organised a special Christmas party on the 19th December for the Campaign at The Alliance in Mill Lane, with the iconic singer James Hunter.  My band, The False Dots will be playing at the  Midland Hotel in Hendon on the 18th.

If you want to organise a gig for the Save London Music Campaign, or you know of a live music venue, please let get in touch via the contact details on this website.

And if you want to know what we are aiming to achieve, these our goals:

The campaign is working to make the case to protect London music venues and studios. Specifically we want to see the following;

1. Special protection for important London music venues from redevelopment. This should take two forms. The first should grant important venues the same protection as listed buildings. The second is that where large infrastructure projects destroy venues (such as the Astoria), the venue should be re-sited elsewhere in equivalent or better premises at zero cost to the operator.

2. Established venues should be protected from noise and disruption complaints from neighbours. Soundproofing etc should not be the responsibility of the venue, where the venue is an established music site.

3. As creative industries are a key component in the UK economy, tax breaks, planning assistance and grants should be made available to any company or individual investing in infrastructure to support creative industries.  This should be done with a view to ensuring that the UK maintains its leading position as the centre of world music.

From a music perspective the following should be available:

* Capital Tax allowances for investment in venues and studios.

* Free or discounted planning costs for studios,  music venues and other music related companies (such as instrument manufacturers etc).

opportunity to get off the ground and generate employment.

* Offer grants to creative industries to assist with the costs etc of starting a creative business, specifically for assistance with the cost of consultants for noise control and other issues which are specific to the music industry.

* Enact legislation to ensure that major new developments include an element of light industrial space suitable for creative industries and studio space at low rent.

* Offer mentoring and assistance to young people wishing to set up SME’s focusing on the creative sector.

We believe all of these measures are vital for the long term health of London as the heart of the worlds music scene.

Roger Tichborne is the founder of the #SaveLondonMusic campaign. Roger founded Mill Hill Music Complex Studios in 1979 and has run them ever since. He is heavily involved in the live music scene, promoting gigs in London and beyond, as well as being an organiser of the bi-annual Mill Hill Music Festival which recently celebrated its 20th birthday. Roger is also a blogger and campaigner for local people in the London Borough of Barnet. He is also a prolific musician and songwriter and has played with his band, The False Dots for 36 years.