We have some very exciting news from The Save London Music Campaign. Whilst last year was primarily one where we were promoting a message, this year, we’ve had a very different focus. We’ve been working on a few projects to bring music back to some iconic places.

Many of you will remember the highly successful North Finchley Festival in May, where over 1,500 people watched 50 acts in six venues over a weekend in May. Putting that together was a supreme effort, but the plan was to prove that the people of North Finchley wanted to see high quality live music back in N12. We were then very tied up with the Mill Hill Music Festival, Jesterfest in West Hampstead, the Cricklewood Festival and finally The Wembley Festival.Well there is some great news. The Save London Music campaign has not only secured a night at The Bohemia to put music back on North Finchley High Street. We are also working with long time promoter of The Torrington, Pete Feenstra, to help him promote a live music at The Old Finchleans club in Southover, near Woodside Park Tube station, under the title of “Spirit of The Torrington”.

North Finchley is one of the iconic homes of live music in London, as The Barnet Eye blogged last month. We are committed to making sure that the future is as bright as the past for North Finchleys live music scene. Whilst the Torrington may be no more, we are sure that with two great venues, it can be twice as good!

Here are the details 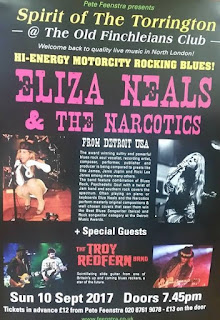 We are proud to welcome, all the way from Detroit USA, Eliza Neal
& The Narcotics. The award winning sultry and powerful blues rock
soul vocalist, recording artist, composer and performer is being
compared to greats like Janis Joplin, Etta James and Ricki Lee Jones.

The band features a powerful mix of blues, rock and psychedelic soul,
with  a twist of Jam band, originals  and southern rock covers. They’ve
won best Blues songwrite twice and best rock songwriter in the detroit
Music Awards. Do not miss this amazing band!

Down The Road from The Torrington – The False Dots + Support live at The Bohemia!

The Save London Music Campaign is delighted to launch the first
of a series of gigs bringing high quality live music back to the High
Street in North Finchley. We kick off with Mill Hill Legends, The False
Dots + Support. The False Dots have been playing their blend of
psychedelic rock, tinged with dark humour and a punk energy and ethos since 1979.
In the 1980’s the band toured the UK and Europe and had a strong cult
following in London.

They are soon to release their long awaited new
album “Songs of Love and War”. They launch our very special series of
gigs at The Bohemia as part of our “Down the Road from The Torrington”
series of gigs.
Admission is free, so help lead guitar Rog T celebrate his birthday in style,
so please come along for a truly awesome night in one of Londons finest
Brewpubs!