Is there a future for pubs and live music venues in London? Before we consider any issues about campaigns, we need to consider this fundamental question. The evidence I’ve seen this week confirms what I’ve long believed the situation to be. On Saturday night, at the #SaveLodonMusic/Barnet Eye Xmas Party and annual community awards, we presented The Midland Hotel in Hendon with Barnet Eye pub of the Year and the Campaign to save it with the community campaign of the year.

I had a long chat with John, who is the Landlord. I’ve known John for a good few years now, but it is actually the first time I’ve had a proper conversation with him. The Midland was formerly owned by Greene King breweries, who sold it to developers three years ago. John explained that since he became a free house, when Greene King sold up, he’s been making far more money. This surprised me, but John explained “Under Greene King, I was a tied Landlord and had to pay a fixed rate for the beers. Now I can shop around, I can get most at almost half the price and offer a better selection of beers”. John has been highly supportive of the #SaveLondonMusic campaign, welcoming us on numerous occasions for gigs at the pub. It is clear that far more people are using the pub and the work John has done has massively improved the ambiance. He’s brought in a table tennis table and transformed the ambiance. It has taken time. Sadly in September, the developer, who had not spoken to John of their plans, dropped a bombshell, as a planning application to knock down the pub appeared on the Barnet Council planning portal. The Barnet Eye blog immediately issued a rallying cry to the local community to object to the plans.

That is the background to the campaign. A thriving pub business up against a developer who simply sees the site as a way to make a quick buck (or a million of them). It soon became clear that Barnet Council had been working quietly with the developers for a considerable amount of time behind the scenes on the plan. The Capita run planning department had apparently been advising the developers that there should be know problem getting their plans through. It really is quite astonishing that a local authority should not have considered the impact on local people, but that appears to be exactly what happened. There have been many worries about the effects of outsourcing the running of the planning department and the conflict of interest between the council making decisions and advising developers. The case of the Midland would seem to us to be a prime example. 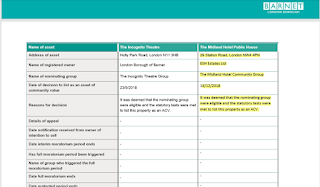 As a result of the Barnet Eye blog, a flurry of objections were posted on the Council website. Once local people became aware of the issue, a group to Save The Midland was formed. The primary focus initially was on getting as many objections as possible, as this was the number one priority. This was highly successful, getting an unprecedented number (over 600) of objections. Local councillors were contacted, who in turn involved the local MP. Local community groups, both formal and informal were also involved. The next step was to get the pub listed as an asset of community value. This gives the pub a degree of protection from redevelopment, putting major roadblocks in the way of development. Local groups and campaigners made submissions. This then went to council and was granted this week.

This has been a major victory. Of course there are still many things that could happen. The planning application is yet to be officially determined, although it would be perverse if this was now granted. There may be appeals etc. But what the campaign has shown is that when a community gets together, it can change things. My expectation is that this is not done and dusted yet, but I think that ultimately the Midland is now highly likely to survive. The developers are still getting a decent income from the pub so have not lost money. I hope that they realise that they are actually sitting on a great asset, and whatever they do, they put the pub at the heart of it (although I know of few developers who actually think like that).

I think that the Midland Hotel Campaign is an absolute model of how to run a successful campaign.

Here are the key elements.

1. Kick start the campaign using all available social media resources, such as Twitter, Facebook, local bloggers, local Press and local radio. All of these have been deployed by the Save The Midland campaign.

Please join The False Dots and @KidWondR at The Midland Hotel in Hendon at 8:30 on Sat 13 Oct for the @Barneteye blog 10th Birthday Party. Sign the petition to #SaveTheMidland pic.twitter.com/8tOH1ndbij

Like we need more luxury flats in Hendon !! 😡
Please post objections – details in the blog.
99% is ……. The Barnet Eye: Urgent – Developer plans to knock down the Midland Hotel in Hendon and replace it with luxury flats: https://t.co/g84rq0q3CA

Currently 574 objections overwhelmingly against turning the pub into luxury flat. Fantastic. Let’s get it up to 600 objections to save the Midland Hotel Pub in West Hendon. #SaveTheMidland

2. Set up a committee to manage the campaign. Make sure this includes local people who are directly affected and also people with direct experience of running campaigns. For the Midland Campaign, an absolutely vital aspect was the support of local councillors, notably Councillor Helene Richman, who is a qualified Lawyer and has proven invaluable in ensuring that the campaigns arguments are legally sound. The Rev Julia Candy from St Johns had an influential role in gaining cross community support and should be acknowledged.

3. Ensure that the absolute maximum number of objections are posted. The Save The Midland Campaign actually set up an “objection station” in the pub with a laptop and someone to help locals object. A local council cannot ignore these. If more than five objections are received the scheme has to go the planning committee. If more than 500 are received, councillors will realise that the people who elected them are taking a major interest.

4. See if listing as an Asset of Community Value is feasible. This is the next best thing to being listed to preserve a building. It is worth checking out the details of the Midland application, as this is a model for how to do it.

5. Run local events to raise awareness. The Barnet Eye organised a party, which resulted in a packed pub and a whole stack more objections to the scheme. Ensure that all users of the pub make representations. The ACV application for the Midland had support from CAMRA, The Save London Music Campaign, the Montague Road Association and local residents. Angels Fancy Dress also provided a list of social events at their local pub.

6. Remember the job is never done. I suspect that every pub under threat can expect to have to fight for years, or even decades. Until the planning laws are adjusted to reflect the distortions that skyrocketing property prices are causing in our communities, we will see more not less of this. The Midland is a successful local pub. The only logic for knocking it down is that a developer can make a quick buck. If developers know that an authority is not going to facilitate this, then maybe, just maybe they will think twice. That is why it is so important to fight. Why not pop into the Midland for a pint over Xmas. We will be and why not become a Facebook friend

If you need any help or advice in how to help save your local music venue, please contact the #SaveLondonMusic campaign for advice and help